In this blog, we document the planning and construction of the new IBN building, which was completed in 2015. The building is a so-called Plusenergiehaus or energy-plus building. Using renewable and mineral-based building materials, it boasts a healthy indoor climate and the lowest possible exposure to electrosmog.

Reducing electrosmog according to the Standard of Building Biology Testing Methods is an important feature of any building based on building biology criteria. ELF electromagnetic fields are minimized by implementing the following strategies: Use of zero-halogen and shielded cables and electrical boxes (including a complete upgrade of any pre-existing wiring) as well as selection of […]

In the beginning, the ring beam was designed to be reinforced by a fiberglass-reinforced polymer (FRP). Due to the curved shape of the building, some curved parts were required for which no license was available yet. As an alternative, conventional steel reinforcement was used. These steel rods as well as some steel trusses were properly […]

In January, the construction of the new IBN building got underway. We recommend using the 25 Principles of Building Biology, which were developed by the IBN 30 years ago, as a basis and checklist for the holistic assessment or design of buildings. So what could be more natural than to measure the new IBN building by […]

Prior to entering into a purchase agreement and getting started with the first plans, the property and the existing building were surveyed according to the Standard of Building Biology Testing Methods. The pictures show how Johannes Schmidt, a member of the IBN team, takes measurements of, for example, radio-frequency radiation (RF) and radioactivity.Based on the […]

For the new IBN headquarters, we have been looking for a suitable project/property for a long time. In the end, we found the right project in Rosenheim (Upper Bavaria, Germany): a small one-story grocery store, which had been built in 1955 and most recently had been selling beverages. The new IBN headquarters are easily accessible […]

Art derives from skill or knowledge (nosse aut posse), maybe from both; certainly, both great skill and great knowledge are necessary to create art. He who has knowledge but no skills is a theorist; therefore he cannot be trusted with actually making something; he who has skills but no knowledge is a mere craftsman—when both […] 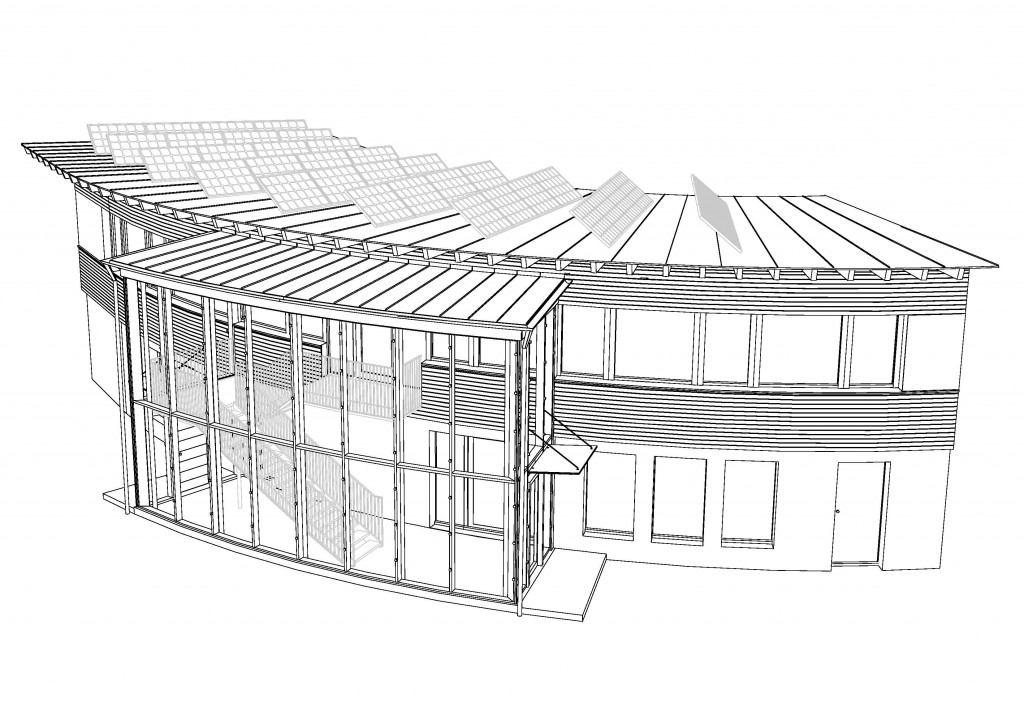 For a long time we’ve been searching for a suitable project or plot for the new IBN building. Finally, a ground floor grocery store, built in 1955, which was last used as a beverage market was found. The 620 sqm property includes a small public park in the west with large beautiful deciduous trees.

The ground-floor, circular, curved construction in solid construction (approx. 110 sqm) was extensively renovated, converted and supplemented in 2014 by an upper floor in timber construction and a winter garden with stairs. An allergy-friendly model apartment (52 sqm) was also integrated. This resulted in a total usable area of ​​approx. 250 sqm.

The declared goal in the planning and execution was that, in a holistic sense, a building is created that meets today’s requirements for building biological, healthy and sustainable building. The new building is a plus energy house made from renewable and mineral building materials, with a healthy indoor climate and the best possible reduction of electrosmog. The building is easily accessible by public transport (bus stop in front of the door).

Since 2015, experiences with the building materials used, as well as building services, have been collected, measured and researched in this flagship project.

The accompanying contributions report on various aspects of the construction project.

The Institute of Building Biology + Sustainability IBN is financially and politically independent. Its main focus is the education and qualification of Building Biology Consultants IBN (Institut für Baubiologie + Nachhaltigkeit) to promote a holistic, sustainable, ecological, and building biology-based approach to building.